A Message from Father McCarthy…

A Message from Father McCarthy that he shared in our February newsletter…During the Vatican II Council, one of 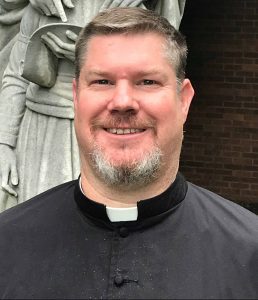 the major changes to occur was in the celebration of the Liturgy; it is still the same Mass, same rituals and special treasures, but presented in a different package. Yet a major problem with the Novus Ordo (New Mass) is that little was done to instruct the priests/laity of this new ritual; many were confused by a different language, as well as what appeared to be changes in the rubrics. As a result, many were – and remain – confused by what to do and still have misconceptions/false beliefs on what the rubrics are. As a perfect example, I often hear, “Why is there Latin in the Mass? The Church got rid of that, didn’t they?” But truth be told, the Vatican II documents require that some parts of the Mass be said in Latin and that the people are to be familiar with Latin, particularly at various parts within the Mass. So, to be true to Vatican II, a Mass must have some Latin, since we are of the Latin Rite Church. Sadly, most parishes don’t do this and thus, are not conforming themselves to the mind of the Church. There are many, many parts of the Mass that people still find confusing 50 years later: Why do we kneel at some parts but stand and sit at others? Most think the music is to make us feel good, and should be contemporary and uplifting. And although the entire Mass is encouraged to be sung, the music the Church Fathers picked was Gregorian Chant and the instrument, the organ. Even now, people are confused when receiving Holy Communion. I have written several times in the bulletin, and spoken in homilies, that Communion in the hand means using both hands, that a single hand is not allowed due to lack of reverence and fear of dropping the Host, yet there are still a few who continue to do this, and others who complain when the Host is placed on their tongue because they stick out a single hand. Probably, most don’t know that when the Council Fathers voted, they voted to continue the practice of Holy Communion on the tongue. It was only years later that the Church gave an indult (exception of the law) for Communion in the hand, but stated two hands be used to make a throne for the Lord. So, the normative practice of the Church is still
Communion on the tongue. These are just a few examples of where people are still confused; when these practices are implemented, they think the priests are not doing what Vatican II said when, in fact, what they are doing is adhering to Vatican II. Another perfect example is the saying from the Council, “Full, actual, and conscious participation by the faithful.” I have heard people change the word “actual” to “active,” thus thinking if they are not physically doing something in the liturgy, they are not fulfilling their duty. But full, actual, and conscious participation has more to do with putting ourselves in a state to allow God’s graces to
transform us; after all, the primary focus is not what we are doing for God, but what God is doing to us. The Mass is the meeting of heaven and earth. It is the supreme duty of the people to honor and praise God, to give to God and sacrifice to Him in a response of gratitude for all He does for us. The Divine Liturgy, i.e. the Mass, is the supreme invitation to share in the Life, Death, and Resurrection of our Lord, and it is through this participation that we are able to take part in the work of salvation, to enter into the new and everlasting covenant to be disciples in this world and realize the promise of eternal life in the life to come. In the past, we have had evening classes on the Mass, once a year I do a walk-through of the Mass for RCIA and invite all parishioners to attend, and we recently had a Mass+… on the same topic. But I also
realize not everyone is able and willing to engage in these education opportunities, so I thought the best thing to do was to give short talks on the Mass at the conclusion of the Sunday Masses. I did this many years ago at another parish, when the 3rd edition of the Roman Missal came out and people were confused over the new translation and new responses. Our Seminarian Intern, Ethan Hoying, as well as
our deacon candidate, Doug Moore, are required to do presentations as part of their training; so, what better way to accomplish both than for them to do the presentations.
These are little lessons on various parts of the Mass, that will begin in February, to serve as education and instruction, so that all of us, together, can learn and better appreciate the
awesomeness and beauty of the Divine Liturgy, the Holy Sacrifice of the Mass. And as we better understand the Mass, the better our worship, and the greater praise and honor we
can give to our Almighty Father.