Jesus Is Waiting for You – Come to Him Thru the Eucharist

Sacrifice in Jesus’ time was part of the Jewish tradition. Jews would make trips to the temple with money, harvest and animals to pay homage to God and as a show of their faith. They also believed God would reward their faith and sacrifice. Abraham was even willing to sacrifice his son to assure God of his devotion. Following in this tradition, Jesus gave the ultimate sacrifice on our behalf. 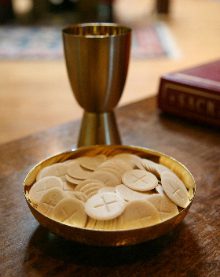 Because of Jesus’ sacrifice on the cross, God rewarded all of us with the forgiveness of original sin. God opened the gates of heaven for us and is now waiting for us to come to Him. He waits for us to follow our Catholic, Christian teachings and devote ourselves to Him.

Jesus is waiting for us to be in communion with Him through the Eucharist. Jesus speaks of Himself and explains: “This is the bread that came down from heaven. Unlike your ancestors who ate and still died, whoever eats this bread will live forever.” (JN6:58)

How fortunate we are to have Jesus’ presence in the Eucharist and the opportunity to repeat His sacrifice within every Mass. The bread and wine becomes His body and blood. This is a gift to us: “Whoever eats my flesh and drinks my blood remains in Me and I in him.” (JN6:56)

Jesus is waiting for us. He is waiting for us to come to him within the Mass. We also have opportunity to go to him during Eucharistic Exposition. He wants us to come to him. He waits for our little Acts of faith, adoration, love, thanksgiving, repentance, reparation and charity that we can offer Him as we contemplate — His Divine Majesty — in the Blessed Sacrament. (Pope John Paul II)