The white crosses on the front lawn of our parish represent the number of babies aborted in clinics throughout the United States every single day. In November 1997, when Larry Sendelbach started this display in Kentucky and Cincinnati, there were 4,200 crosses. The 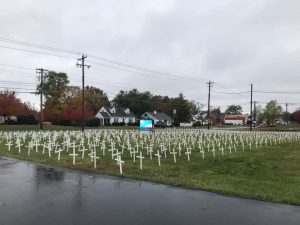 number then dropped to 4,000 and today it is 3,500. This number does not include babies who die as a result of the morning after pill.

In November 2018, Miami University’s Students for Life erected the display on campus. Within days, the display was vandalized three times. The second time, the crosses were pulled out of the ground and put in recycling bins. A similar incident took place on the campus in April 2018, and at Northern Kentucky University in October 2017.

As we pray for an end to abortion and the culture of death in our country, let us also pray for the students who fight so bravely for the pro-life cause on college campuses across the United States.