History of the Feast of St. Nicholas

As we wait for God to become incarnate, we look to the whole body of Christ, past and present, for models of embodied faith. The commemoration of saints has been a part of Christian worship since the second century. On December 6 we remember Saint Nicholas, who
was the Bishop of Myra in the province of Lycia during the 4th century. Very little is known about his life, but he is remembered as a man of great faith and compassion. He was also a fierce advocate for those who had been unjustly condemned. But he left behind no writings; the 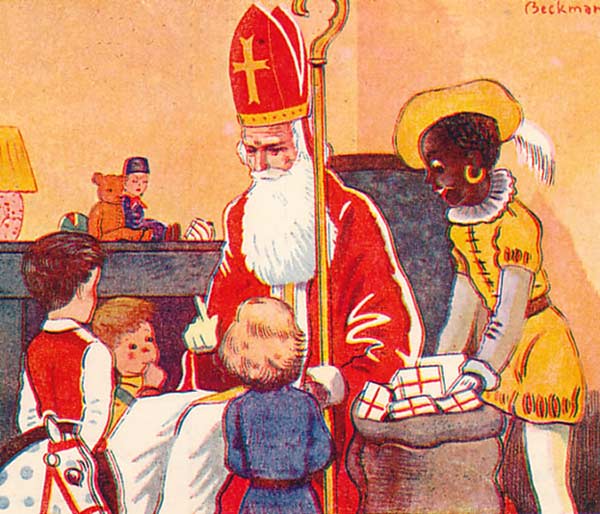 legends surrounding his life are all we have. Nicholas is most well known in the West as the beloved patron saint of children and gift-giving. His connection to the American character of Santa Claus is faint, but it can be traced. According to tradition, Nicholas’ parents died when he was young, leaving him a large sum of money. With his inheritance, Nicholas practiced charity, helping those in need. One legend in particular illustrates his generosity: a family in his community was desperate; the father had lost all of his money and had been unable to find husbands for his three daughters. The daughters were in danger of being given over to prostitution when, one night, Nicholas appeared at their home. He tossed three bags of gold into the open window (or down the chimney, in some versions), thereby saving them from a terrible fate. This tale is probably the source of his connection to the tradition of gift-giving at Christmas. The custom of giving gifts on his feast day probably originated in Europe and spread with immigration to North America when Dutch children told their English-speaking friends
about “Sinter Klaas,” the bishop in red vestments who brought them surprises on his feast day. The American mispronunciation – Santa Claus – eventually took on a life of its own. This jolly Saint Nick also delivered gifts through the chimney, but on Christmas rather than the
saint’s day. He wore a red suit rather than liturgical vestments, though he still vaguely resembled the old depictions of Nicholas, which showed him with bald head and full beard. The notable difference between St. Nicholas and Santa Claus is the nature of the gifts they give.
Santa has his bundle of toys, while St. Nicholas gives freedom from poverty and desperation, an example of faith made flesh in acts of true charity.