Angels are sometimes an over looked part of our faith. How many times to your remember your Guardian Angel is looking over you or angels are among doing God’s will. Yet, according to a CBS News Poll which is consistent with other survey findings angels have a special place in many people’s thoughts.

“Angels don’t just sing at Christmastime. For most Americans, they’re a year-round presence. A new Associated Press-GfK poll shows that 77 percent of adults believe these ethereal beings are real. 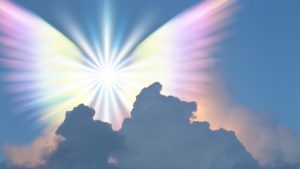 Belief is primarily tied to religion, with 88 percent of Christians, 95 percent of evangelical Christians and 94 percent of those who attend weekly religious services of any sort saying they believe in angels.

But belief in angels is fairly widespread even among the less religious. A majority of non-Christians think angels exist, as do more than 4 in 10 of those who never attend religious services.

The finding mirrors a 2006 AP-AOL poll, which found 81 percent believed in angels.” The Associated Press.